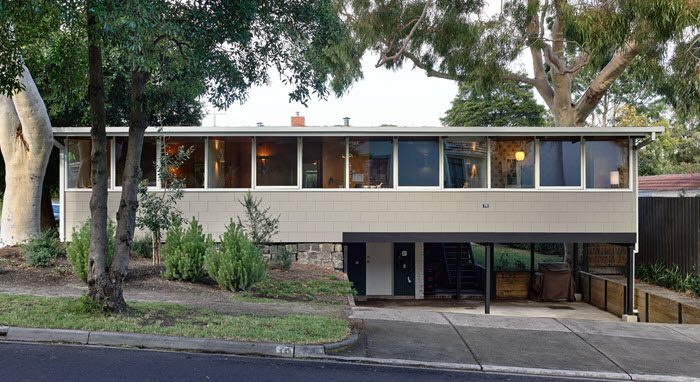 Beaumaris, is a suburb nestled on the shores of Port Philip Bay, which once had a reputation for some of the best examples of mid-century architecture in Australia. Sadly, without any protection or recognition, many of these significant homes have been demolished.

Fiona Austin has researched and documented many of these houses over the past 20 years, publishing two books featuring 31 of amongst the best examples. She has also advocated for the preservation of significant local built heritage for over 20 years, and since 2017 with the support of community not-for-profit group, Beaumaris Modern, for whom she is the President.

Their advocacy has taken a multi-pronged approach, with both direct lobbying (and protest) to local and state authorities, as well as pro-active strategies for celebration, promotion, and education with the community. As worthy mid-century properties appear on the market, the group promote them to possible sympathetic buyers. Beaumaris Modern OPEN days, walking tours and other events offer further opportunity to engage the broader community.

The recently released ‘Beaumaris Modern 2’ documents and reveals 17 more unique expressions of the local mid-century style from behind the local bush streetscapes.

Fiona Austin was a director of Austin Design Associates, established in 1999, she sold the practice to her staff in 2019 and has now retired. She is a founder and president of Beaumaris Modern.

Peter Maddison is a multi award-winning architect and Director of Maddison Architects, a practice he started in 1989. In 2014 he was conferred the prestigious Degree of Doctor of Design (Honoris Causa) by RMIT and in 2016 the National Presidents Prize by the RAIA for Australian Achievement in Architecture.

Wilko Doering is an Architect & owner of ‘The Kinder’ house.

Wilko started his architectural career working on one of Europe’s largest heritage construction sites – The Frankische Stiftungen in Halle, Germany.

Now living and working as an architect in Melbourne, when it was time to buy his family home,  he was drawn to the mid-century houses in Beaumaris.

Laura and Wilf have spent the past 7 years restoring and renovating their mid-century modern home. Much of the work has been ‘hands – on’, working with specialist trades to restore and re-use much of the original fabric of their home as possible.

– Wine and beer sold by the glass.
– ‘Beaumaris Modern’ & ‘Beaumaris Modern 2’ books by Fiona Austin for sale.
– Credit card sales only.
– If it’s your first time to the house, seek out our volunteer guides for a quick tour.

If you are a subscribed friend, log in to purchase member's tickets.